The New Turkey: The Quiet Revolution at the Edge of Europe 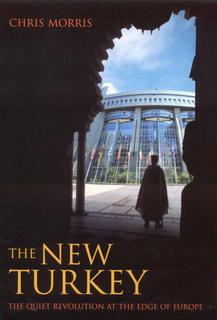 Chris Morris, Granta Books/2005
Pressure for change has come from ordinary people fed up with the old ways; it's also been motivated by the dominant issue of Turkish political life - the long pursuit of membership of the European Union. And yet Turkey remains a mystery to many outsiders; a complex country hard to understand. It's secular and Muslim, Western and Eastern, democratic and authoritarian, all at the same time. This book examines the potential and the problems of the new Turkey, and the expectations of the people who live there, drawing on first hand interviews and observations gathered over several years. Chris Morris has covered Turkish affairs for the BBC for the last eight years — first as Turkey correspondent based in Ankara and Istanbul, and then as Europe Correspondent based in Brussels.
‘Remarkably, more than half of Europe’s TV sets are made in Turkey. This is just one of the many fascinating pieces of information in The New Turkey… a very lively book in which Morris sets his scenes like a novelist’ Conde Nast Traveller (http://eubookshop.com/16/76)
.
IEA Event- Chris Morris, Author of "The New Turkey"
28 Nov 2005- Turkey's Accession
Meeting of the Enlargement group discussing the issue of Turkey’s Accession with Chris Morris, BBC Correspondent and Author of The New Turkey.
This discussion followed on from the decision by the EU Council to open talks with Turkey on EU
Membership on 3 October 2005 and the EU's 2005 Enlargement Strategy Paper. The Commission has since started the screening process.
.
Speech on RealPlayer (.rm, 0.92MB)
.