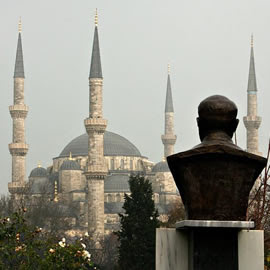 Over the last decade, Turkish foreign policy has undergone a profound – and unprecedented – transformation.

"Turkey," Philip Robins could still write at the beginning of the decade, "is a status quo power."

"The ideological change related to the emergence of a hegemony of liberal values, with their emphasis, in the political domain, on democracy, pluralism, human rights and civil society. […] Turkey just did not connect with the spirit of these normative changes. […] By the early 1990s, rather than being transformed by liberal, exogenous factors, Turkey was retreating from such values as a process of de-democratization began to take hold."

As Robins put it back then, "history tells Turks to be suspicious, especially of their neighbours, who covet their territory or seek to erode the greatness of the nation through devious means."

Some of that suspicion remains, but much of it has melted away. The European Union, wrote Kemal Kirişci in 2006, "has succeeded in having an impact on Turkey's 'culture of anarchy', moving the country out of a Hobbesian world toward the Kantian one." A multifaceted foreign policy of "zero problems with neighbours" has taken root, vastly improving relations with countries like Russia, Syria, Iran, Iraq and Greece. Even in the case of Armenia – where diplomacy has been hostage, for the most part, to historical disagreements – a rapprochement appears to be in the offing.

A tangible shift in trade patterns, a sign of a diversified foreign policy portfolio, has also taken place. Since 2002, exports to neighbouring and Black Sea countries (Bulgaria, Greece, Syria, Iraq, Iran, Georgia, Azerbaijan, Russia, Romania and Ukraine) have risen year after year – from 11 percent of total exports in 2002 to 20 percent in 2008. Imports from these countries, over the same period, have jumped from 15.5 percent to 27.6 percent. Turkey, under the AKP, has also signed Free Trade Agreements (FTAs) with Morocco, Palestine, Tunisia, Syria, Egypt, Albania and Montenegro.

Turkey's new geopolitical position, argues Ahmet Davutoğlu, the most influential foreign policy thinker in Turkey, "has to be seen as a means of gradually opening up to the world and transforming regional into global influence. […] Turkey is both a European and Asian, Balkan and Caucasus, Middle Eastern and Mediterranean country."

As Graham Fuller sees it, Turkish foreign policy is now freeing itself from the legacy of "decades of Kemalist oriented history instruction [that] indoctrinated the country to think negatively about the Islamic world in general and the Arab world in particular."

Perhaps the most poignant description of the new face of Turkish foreign policy comes from a non-expert, however. US President Barack Obama, in his address before the Turkish Parliament on April 6, had this to say:

"I know there are those who like to debate Turkey's future. They see your country at the crossroads of continents, and touched by the currents of history. They know that this has been a place where civilizations meet, and different peoples come together. And they wonder whether you will be pulled in one direction or another. Here is what they don't understand: Turkey's greatness lies in your ability to be at the center of things. This is not where East and West divide – it is where they come together."